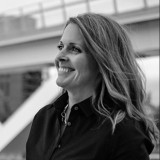 It’s something the Society of Obstetricians and Gynaecologists recognized as especially true for women in Canada. And so, the HerNutrition site was born. HerNutrition is an entirely research-based website and the first of its kind in Canada. The site covers specific nutritional information for young women to women experiencing menopause.

We were charged with creating a promotional campaign to drive traffic to the new website. We chose to use Facebook and Instagram for our channels. Like all campaigns, this promotion needed to quickly grab the attention of two increasingly crowded platforms and create enough interest to generate clicks to the website.

How do we accomplish this?

It seems that everyone has an opinion about what you should be eating these days. The topic of nutrition is hotly debated, and misinformation is easily, and widely, spread. We created carousel ads that were informational and had an individual image or ‘card’ that spoke to a different age group.

We have found that Carousel ads are great at driving traffic to websites, and these units were no different. The average Outbound CTR for just the carousel ads was 2.24%.

For our video ads, we took aim at the misconceptions about nutrition with short, cheeky videos. Taking a comedic stance in this internet-wide debate, we decided the best way to reach our goals was to design funny and relatable ads. We created 20-second videos that poked fun at some of the less-than-accurate nutritional advice circling the web.

We kept production costs low by using stock footage and music — we even had our staff voice the sound effects. We used a vintage wash and a pastel colour palette with simple visuals to stand out from the crowd. We used text in the videos so they could be easily consumed without sound, since many mobile users have their phones muted while on social media platforms. We used a square ratio for the videos which puts the viewer in a more immersive environment and creates a full-screen effect when viewed on mobile devices. We created these ads in both English and French.

The results were fantastic.

The campaign garnered just over 550,000 impressions and over 19,000 outbound link clicks, and our video ad units had just under 25,000 views. Our average Outbound Click Through Rate for the entire campaign was 3.49% and our best performing video had a 6.32% Outbound CTR. (Outbound CTR only tracks the link clicks that send people off the ad to an external site, the regular CTR tracks any clicks on the ad). To put that into perspective, the latest data from Wordstream shows that the average CTR for videos on Facebook is 0.45%.

These videos gained the attention of our audience, sparked interest, and drove clicks to the website; our ultimate goal.