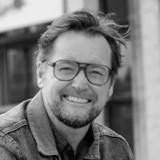 Alphabet®? That’s a good name. Sergey and Larry think so too!

“Good morning DMB&BDDFH&B – how can help you?” the receptionist said firmly and politely. My 20 year-old brain couldn’t help itself, the laughter just poured out at the absurdity of what she’d just said. It was at that moment that I decided that if I ever owned an ad agency I’d just call it Alphabet® – you know, to cover all the bases – so I did.

It was the late eighties in Dublin and local agency DDFH&B had just merged with a large international firm called DMB&B and I had called to speak to a friend who worked there. For those glorious, precious few days before they changed their name to something equally ridiculous I’m sure – DMB&BDDFH&B in all its pomposity – lived. A veritable conga line of Pete Campbells genuflecting to their own initials as they filed past the brass plaque on the door.

Okay admittedly, I’m being a little unfair to agency owners. But historically the advertising industry has always gravitated towards these self-referential acronyms as agency names, you don’t have to be a MadMen aficionado to figure that out.

Alphabet®, at the time, seemed to be a perfect name. it imbued all the brand attributes of a modern, progressive advertising agency – welcoming, familiar, friendly and casual. It was conversational – a nice balance of sophistication and industry self-deprecation. Alphabet® had a story that was authentic – the foundation of any brand.

Fast-forward 25 years and it turns out we are not the only ones to like the name. Google, or as we like to call it ‘The Internet’ … recently announced that it’s changing its corporate structure and re-naming the company Alphabet Inc.

For a small advertising agency, this obviously presents some not insignificant challenges.

Hmmm … this could be a problem.

As a matter of fact, Alphabet® is already seeing some brand confusion as we track numerous Linkedin requests from people who apparently think that we own Google.

For the record, we do not own Google.

We do however own a registered trademark for an advertising agency called Alphabet® that helps our clients find new customers by using all the digital, traditional and experiential channels at our disposal.

At this point we are just going about our business and keeping a close eye on proceedings. There’s nothing to suggest that Google will present any direct challenges to us. Google is an incredibly innovative company and a tremendous steward of The Internet – offering many invaluable services to the world – for free. But it is a ‘company’, publicly traded, profit-minded and beholden to its shareholders, and a Canadian ad agency would be considered a mosquito on the windshield of that juggernaut.

The moral of the story? For small business – own your brand. Understand what it means both from a customer relationship point of view and also from an administrative and legal point of view. Your shingle isn’t just hanging on Main Street anymore. The world can be your marketplace so you need to get out there and be seen. But make sure you’ve done your due diligence, make sure you’re not infringing on any trademarks and empower your brand with good marketing and by making sure you’re good at what you do.